The Energy Independence and Security Act of 2007 provided the latest round of government regulated standard efficiencies allowed for air conditioners sold in the Unites States.  These new standards went into effect on January 1, 2015.  What is unique about these new efficiency standards is that they have allowed for different standards for various parts of the country rather than having just one national standard.  Similar to the standard efficiency increases experienced in 2006 when the minimum went from 10 SEER to 13 SEER, this regulation will apply to all equipment, whether it is being installed in an existing structure as a system replacement or in a new structure.

Here is a summary of what you need to know about the new regulations (also, see the map and table below):

Southwestern States – Minimum efficiency also goes to 14 SEER for air conditioning, but there is a new standard for EER that will call for 12.2 EER for systems less than 45,000 BTUH and 11.7 EER for systems over 45,000 BTUH. Heat pumps require national standard of 14 SEER and 8.2 HSPF

Looking for even more info on SEER ratings? Check out this helpful article: Seer Ratings explained. 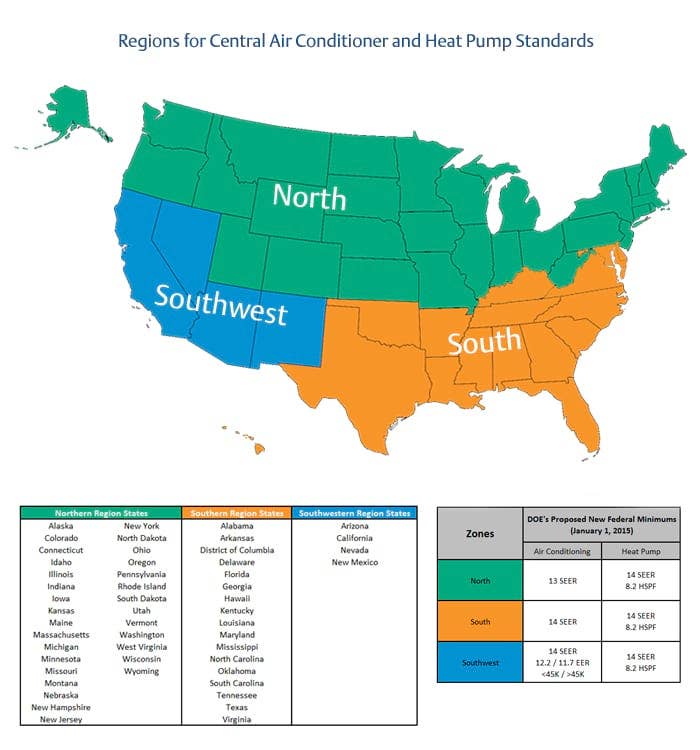